Hi everyone, today I wanted to take a little bit of time and talk to you about rhinoplasty or a nose job. The top five reasons patients come to me and ask to have a nose job or rhinoplasty is primarily to enhance the shape of the nose in proportion to the face. I see most commonly in patients in the office, and the most common complaints I get are:

1. Improve the Appearance of Their Nose

Generally, patients are asking me to improve the appearance of their nose because they think their nose is too big or generally too wide for their face. A proper nose should really just fit the shape of the face. If you have a really narrow face and a wide nose it looks out of place. If you have a narrow nose and a wider face, it too looks out of place. But most of the time people have a wider nose and they want it to be smaller.

2. Get a Straighter Nose

Is that they have that dorsal hump or the bump, so they want a straighter profile view, they want their side view to have a nice straight line. They may even want a scoop in the appearance and we call that a hump reduction and that is something that we can do surgically to improve the nose.

3. Reduce the Tip of Their Nose

I have patients come to me and ask for a rhinoplasty or a nose job because they feel that the tip of their nose is really big. What does that mean for them? It means that when they look from the front they feel like the tip is just out of proportion from the rest of their nose. We call this a bulbous tip. Usually when we look at a nose, especially from the base view or the bottom up, you want the nose to form a triangle shape. If it looks like a rhombus shape you know that you have a bulbous tip. And that’s something that we can improve surgically.

4. Repair a Trauma or Fracture

The fourth reason that I have people coming to me to have their nose done is typically because they have some sort of a trauma. They have had a fracture, their nose looks crooked, their nose is shifted to one side or the other, or broken and pushed in, or they might even have a c-shape deformity to their nose. That is something that can be fixed and only fixed through a rhinoplasty. 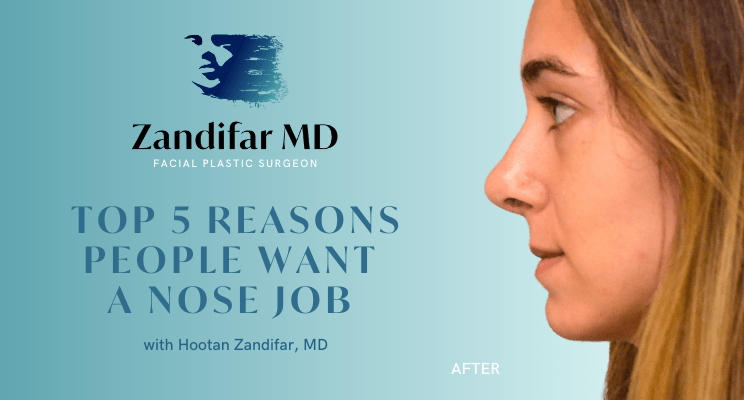