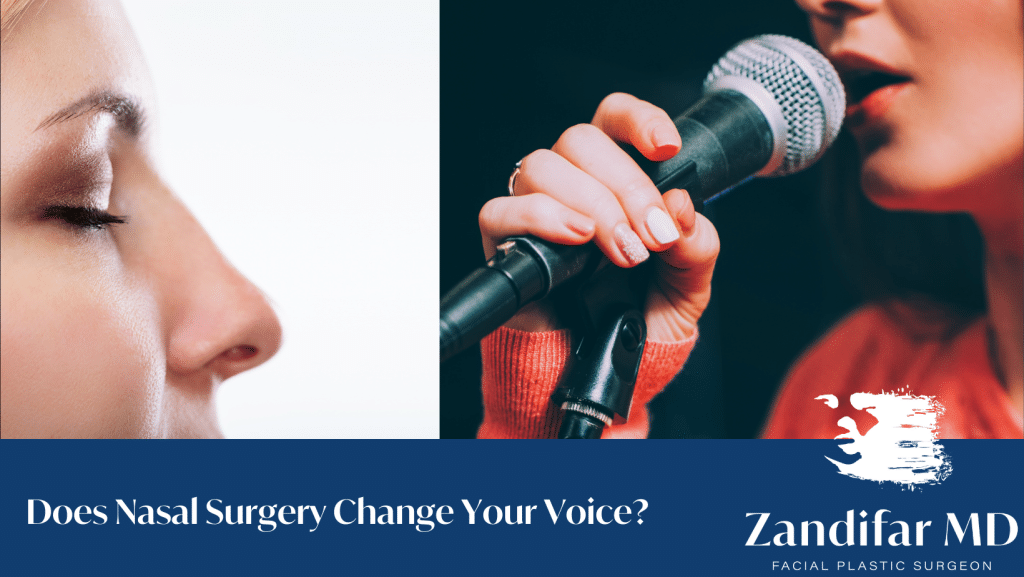 Does Septoplasty, Rhinoplasty or Sinus surgery change your voice?

Many professional voice users, singers and actors when dealing with voice issues, find themselves considering nasal or sinus surgery. Sometimes, the reasons are valid, when the singer is plagued with nasal and sinus problems that affect the reliability of their singing voices such as chronic sinusitis, nasal obstruction or a deviated nasal septum. Other times, the nose is incorrectly “blamed” for voice issues when the true cause of voice symptoms is misdiagnosed.

When considering surgery for voice issues, it is extremely important to be precise about determining the cause of voice symptoms. Unnecessary surgery risks not only leaving the voice condition untreated but causing a problem that wasn’t there in the first place.  In our office, we have seen this firsthand. A young singer came for a second opinion after having a septoplasty, when her voice symptoms were misdiagnosed as being due to her deviated septum. After her septoplasty, she was still having voice symptoms but now her nose was also bothering her.

Because misdiagnosis is rampant in the field of voice medicine, singers often find themselves at a loss when dealing with voice issues. They struggle with diets, reflux medications, and voice rest when accurate diagnosis might point to a nasal source. When nasal surgery is deemed necessary, many singers are fearful of voice effects from a surgery. This fear is not without reason. There are many singers who have found vocal placement, resonance, and tone to be different after nasal surgery.

How does the nose affect the voice?

The nose is a critical part of vocal resonance. It is because of nasal resonance that we can listen to someone’s voice and know they are congested or have a cold. Loss of the nasal cavity as a resonator gives the voice a flat, dull sound. Nasal inflammation can also result in postnasal drip and throat clearing, hoarseness, and vocal fatigue.

What causes your voice to change after nasal surgery?

Voice changes after nasal surgery are caused when the surgeon does not appreciate nasal resonance and the singing voice. Complications can arise with misdiagnosis of the responsible areas, overtreatment of sinuses, or complications such as the septal perforation. This latter condition is far more common after septoplasty than initially believed, and has devastating consequences for the singer and non-singer alike.

How can voice changes after nasal surgery be prevented?

Because resonance is partly derived from the nose, when the shape of the structures in the nose change, this can affect the voice. Nasal surgery typically deals with the septum and the turbinates. The sinuses may or may not need treatment. A nasal surgeon who is experienced working with singers and has a partnership with a laryngologist is critical. The collaboration of these two professionals allows for voice analysis and a determination of which structures need to be treated to resolve voice symptoms. Most importantly, that conversation allows precise determination of whether or not surgery even needs to be done. The most important step in this process is the first one, asking “Does this patient need surgery?”

At this point, the most critical elements are

This extensive evaluation and treatment plan is a part of the Singer’s Nasal Care protocols which were developed in collaboration between ZandifarMD and Center for Vocal Health.   These protocols reduce complications for singers and have resulted in unparalleled voice and nasal outcomes for patients, with a rapid return to improved singing.

Whether you are considering rhinoplasty for cosmetic or medical reasons, Dr. Zandifar and his team can address your concerns and guide you down the path to a beautiful nose.