Deviated septum surgery and how impacts the shape of your nose? 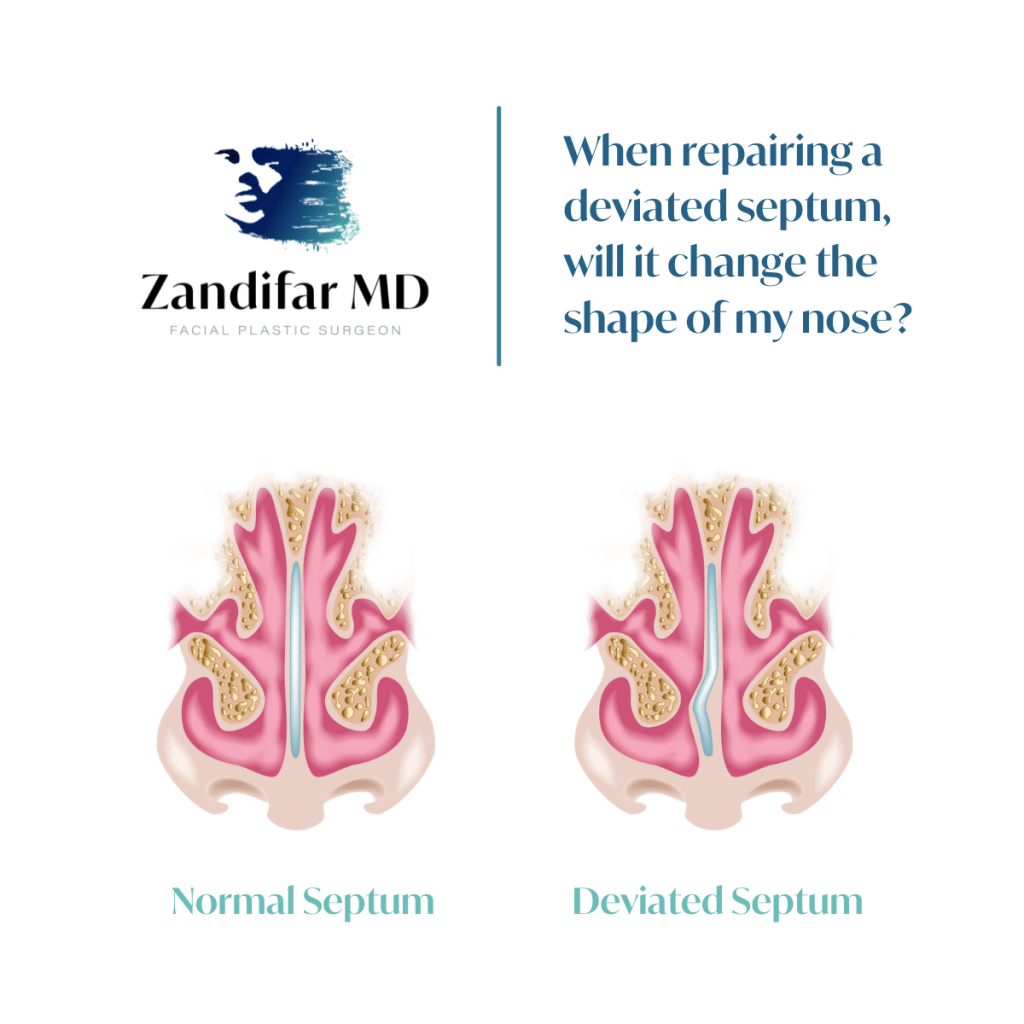 Will fixing my crooked septum change the shape of my nose?

Almost every facial plastic surgeon has been asked this question. The answer, however, isn’t so simple. To better answer this questions let’s first define the terms septoplasty and rhinoplasty.

The middle wall inside your nose that separates the two nostrils into a right and left side is called the nasal septum. This wall extends from the front all the way to the back of the nasal passages. The septum is typically midline meaning it is straight.  In patient’s who suffer from a deviated septum, this wall is crooked to one side or the other.  This deviation can occur anywhere along the length of the septum.  Often times this deviation is inside the nose and no external crookedness is observed.  But sometimes this deviation is at the opening of the nose or along the top part.  When the septal deviation is in these special locations then the crookedness is easily seen on the outside of the nose.  Septoplasty is the surgical procedure that corrects a deviated septum.

Septoplasty procedures are often needed by people who are dealing with any number of recurring nasal issues that block the nasal passage and make breathing more difficult. Some of the most common reasons for Septoplasty are:

Septoplasty can be performed as a stand-alone procedure; however, in specific situations, your provider may recommend septoplasty in conjunction with other functional nasal surgery such as turbinate reduction. It’s also common for people who are undergoing a septoplasty procedure to talk to their facial plastic surgeon about completing a rhinoplasty procedure at the same time.

What is rhinoplasty or a nose job?

Will a septoplasty change the shape of my nose?

The answer to this question is “it depends”.  In most cases where the septum is deviated inside the nose, with no external deviation, a septoplasty does not change the shape of the nose.  However, depending on the location of the deviated septum, a septoplasty may need to be combined with a rhinoplasty to get the best breathing and cosmetic results.  In these instances, patient will need to undergo a combined procedure called septorhinoplasty.  When we perform a septorhinoplasty (a nose job and a deviated septum repair) then the external shape of the nose is changed to achieve a better functioning nose that looks great.

Will insurance cover my septoplasty and rhinoplasty procedure?